As Putin Pushes a Merger, Belarus Resists With Language, Culture and History

HARADZISCA, Belarus — With his vulnerable country under mounting pressure to integrate with Russia, its much bigger and stronger neighbor, a Belarusian poet and television presenter has identified what he thinks is potent weapon of defense: an inch-tall piece of carved deer antler.

The figurine, unearthed by archaeologists in the ruins of an ancient city on the outskirts of Minsk, the Belarus capital, is a chess piece, probably a knight. It’s proof, in the poet’s view, that his country has existed for a millennium as a culture and polity separate from Russia.

“This means that 1,000 years ago people on this spot were sitting playing chess,” said Gleb Labadzenka, the poet. “Our neighbors’ capitals — Moscow, Warsaw, Vilnius — did not even exist at this time, but here we were playing chess.”

In Belarus, Ukraine and other parts of the defunct Soviet Union, an endless tug-of-war between Moscow and its former dominions has often been defined by quarrels over oil and gas pipelines, military alignments, and geopolitics.

Subscribe for original insights, commentary and discussions on the major news stories of the week, from columnists Max Fisher and Amanda Taub.

At bedrock, however, are sharp differences over history, culture and language. And it is on this front, Mr. Labadzenka and like-minded Belarusians believe, that their country can best resist pressure from President Vladimir V. Putin of Russia to accelerate moves toward a so-called “union state.”

The Belarusian poet and television presenter Gleb Labadzenka on the ramparts of a fortress in Haradzisca, the original site of Mensk, a forerunner of modern-day Minsk.CreditJames Hill for The New York Times 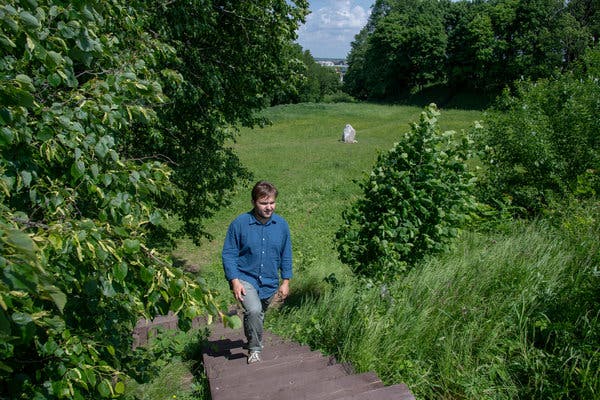 This ill-defined entity comprising Russia and Belarus was first agreed to in the mid-1990s, and after years in abeyance, it is once again on the agenda as Mr. Putin pushes Belarus’s authoritarian president, Aleksandr Lukashenko, to pick up the pace on integrating the two countries.

The two countries have eliminated immigration and custom controls for each other’s citizens at their shared border, but the common legislature, flag, anthem, army and currency called for in a 1999 treaty have not happened.

Alarm over Russia’s intentions has risen to fever pitch recently, particularly among Mr. Lukashenko’s opponents, amid speculation that the Russian leader wants to force a merger of the two countries so as to give himself a way to stay in power beyond the end of his presidential term in 2024. 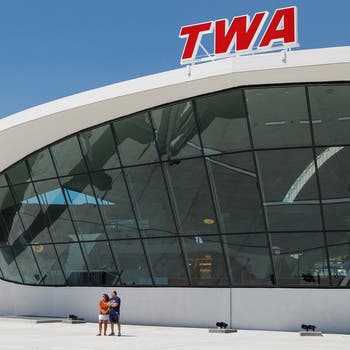 Martinis at the Bar. Sinatra on Repeat. The TWA Hotel Sells a Jet-Age Fantasy. 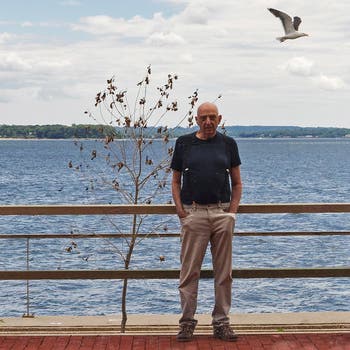 He’s Spent Just One Night on His Private Island. He’s Had Enough. 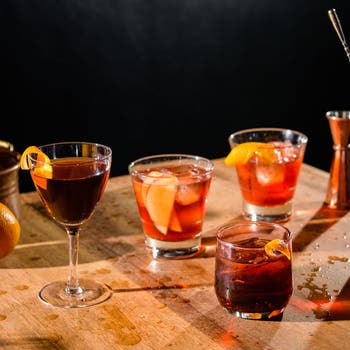 The Negroni Is a Century Old, but Just Hitting Its Stride

Full integration between Belarus and Russia would create a new leadership post atop a merged superstate, a position that Mr. Putin, who is barred by the Constitution from staying on as Russia’s president after 2024, could fill without violating the law.

The Russian president has denied having any such ambitions, but many in Belarus are nonetheless worried, particularly those who have long accused Mr. Lukashenko of selling his country short to Moscow.

A Belarusian language class in Brest.CreditJames Hill for The New York Times 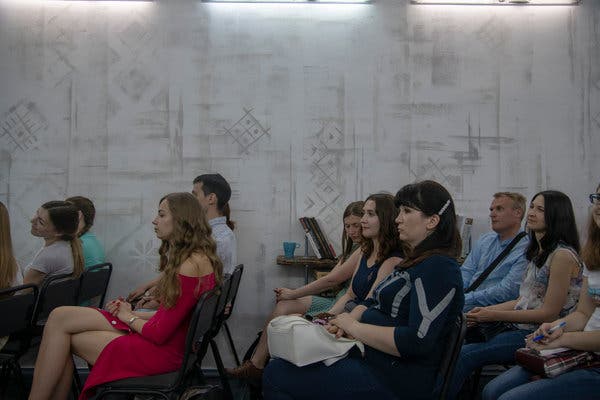 A deadline of the end of June for the two countries to come up with an action program on integration so alarmed Vladimir Neklyaev, an exiled Belarusian writer, former political prisoner and former presidential candidate, that he recently warned of an imminent “war for survival.”

Few share this apocalyptic view, but even Mr. Lukashenko has signaled unease about Russia’s intentions. While dependent on deliveries of cut-rate Russian oil to keep his economy afloat, he has taken an increasingly robust stand against intrusions by Moscow and sought to patch up relations with the West.

In March, for example, Belarus adopted a new “informational security concept” aimed at countering not so much democratic ideas from Western Europe as the flow of aggressive, chauvinistic propaganda from Russia belittling Belarusian statehood, its language and separate history.

Mr. Lukashenko, who came to power in 1994, for years saw little need to promote a strong sense of national identity, regarding Belarus patriotism as a subversive project sponsored by his political foes. Soon after coming to office he held a referendum that endorsed economic integration with Russia and gave the Russian language equal status with Belarusian.

Mr. Lukashenko’s views, however, began to change in 2014, after Moscow annexed Crimea and sent troops into eastern Ukraine on the pretext of defending Russian speakers belonging to “Russky Mir,” or the Russian world. This amorphous cultural space also includes most of Belarus, parts of Kazakhstan and sizable populations in three Baltic States.

A poster in Minsk with the slogan “I love Belarus.”CreditJames Hill for The New York Times 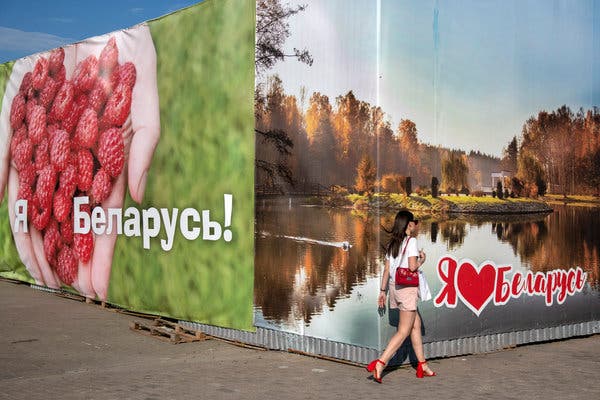 With his worries amplified by recent Russian pressure to put in place the stillborn union state, Mr. Lukashenko has now started trumpeting his country’s ancient roots.

In April, Mr. Lukashenko recalled the history of Polotsk, a town in northern Belarus, describing it as “our holy site.” From the 10th to the 13th century, the principality or duchy of Polotsk was the center of an early Slavic power, long before the rise of Muscovy, the precursor of modern Russia.

He earlier scoffed at the idea that Belarus “is part of the so-called Russian World.” Mr. Lukashenko still speaks mostly Russian in public but now sometimes uses Belarusian, too, a Slavic language he had in the past derided as inferior to Russian.

“We are proud of our history and land, the homeland of outstanding people, our compatriots,” he said this year, speaking in Belarusian. “We know our roots, honor traditions. ”

Mr. Labadzenka, while not a fan of Mr. Lukashenko, said he applauded the president for recognizing that preserving Belarus as an independent state depends on moving beyond Soviet-era narratives of Slavic brotherhood to create a stronger sense of national identity.

While still often described as Europe’s last dictatorship, Belarus “is not North Korea” and has grown somewhat more tolerant of dissenting voices, said Pavel Belavus, the owner of a shop in Minsk.CreditJames Hill for The New York Times 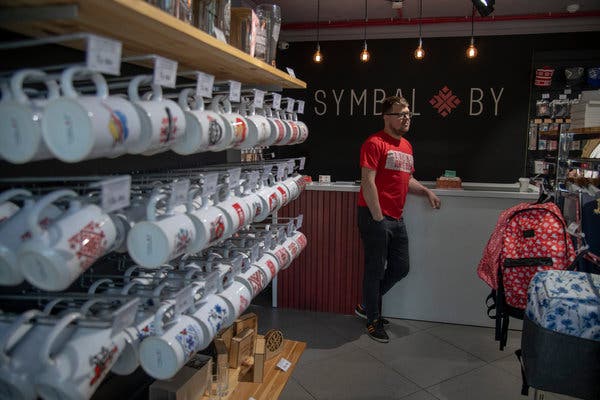 “He understood that if you don’t revive people’s national memory, the people can, sooner or later, be turned into something else,” the poet said.

With the Belarus authorities infuriated by frequent sneering at their country in the Russian news media, a court in Minsk last year convicted three contributors to Regnum, a nominally private Russian news service with ties to the security apparatus, on charges of inciting ethnic discord by mocking Belarus and its language.

One of the convicted writers had ridiculed Belarusian as a crude dialect of Russian that betrayed Belarus’s “lower cultural level.” Another equated Belarusian patriotism with fascism, repeating a refrain often heard in Russian propaganda against Ukraine. They received suspended jail sentences.

While still often described as Europe’s last dictatorship, Belarus “is not North Korea” and has grown somewhat more tolerant of dissenting voices, said Pavel Belavus, the owner of a shop in Minsk that sells Belarus-themed clothing and literature. For example, he said, his shop now openly sells the white-red-white flags of a short-lived Belarus republic in 1918, long viewed by the government as an emblem of the opposition.

On a recent afternoon, a young policewoman paid a visit to the shop, but she was there to look at its patriotic-themed stock and ask about a Belarus language course, a sign that interest in history and culture is no longer restricted to opposition-minded dissidents.

Pit Pawlaw, the guitarist of the country’s best known-band, NRM, or the Independent Republic of Dreams, all of whose songs are in Belarusian.CreditJames Hill for The New York Times 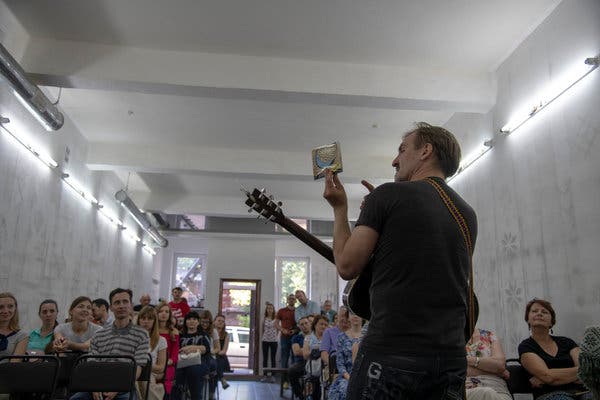 “Language is the basis of everything. Without our own language, we don’t have our own country,” said Olena Anisim, an officially sanctioned opposition member of Parliament and the head of an independent group set up to promote Belarusian, a language widely used on traffic signs and in some official documents but rarely spoken on the street or in schools.

Ms. Anisim said she had no objection to the use of Russian, the country’s main language, but just wants to preserve Belarusian as a living tongue.

Svetlana Alexievich, the Belarusian writer who won the 2015 Nobel Prize in Literature, summed up the predicament of many in her country in a recent television interview: “Of course, I am Belarusian and my mother tongue is Belarusian — though I don’t speak it because the whole practice of my life has been Russian language and Russian culture. But I feel myself Belarusian, that I am in Belarusian land and this is my land.”

Young people, who grew up after the collapse of the Soviet Union, are showing increasing interest in a tongue now mostly restricted in daily use to older villagers in the countryside.

On a recent evening in Brest, a western city near the border with Poland, scores of people, mostly young, gathered for a meeting of Mova Nanova, a national program set up by Mr. Labadzenka, the poet, to teach and promote Belarusian.

Yuliana Korzan, a 26-year-old worker in a furniture factory, said she signed up for the session because she felt ashamed at not being able to speak the language properly while being fluent in Russian.

The main attraction of the night was Pit Pawlaw, the guitarist of the country’s best-known rock band, NRM, or the Independent Republic of Dreams, all of whose songs are in Belarusian.

The group was banned for years from performing in public because of its politically tinged lyrics and open championing of Belarus as part of Europe, not Russia. Mr. Pawlaw said the informal ban now seems to have been lifted, apparently because its songs support the government’s interest in promoting national identity.

“I am not against Russia. I am just not interested in Russia,” Mr. Pawlaw said. “We have been living side by side for a thousand years. It is time to move on. We are Europeans, not little or inferior Russians.”

An earlier version of this article misstated the color scheme of the 1918 Belarusian flag. It was white-red-white, not red-white-red.

A version of this article appears in print on June 30, 2019, on Page A12 of the New York edition with the headline: As Putin Presses for Merger, Belarusians Bolster Their National Identity. Order Reprints | Today’s Paper | Subscribe 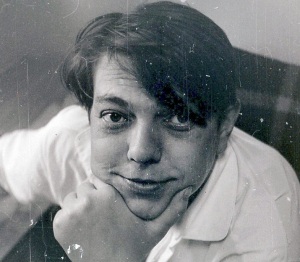